The chicks are now out and about with their two mummies. Bobblehead (black silkie) and Maeve (white silkie) sat on the eggs together, hatched the eggs together and are now co-parenting the eight chicks. To quote Jude – this is utterly adorable. 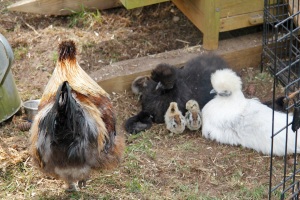 A few days after hatching the chicks they took them into the small run and I decided to let them out into the garden. The first thing they did was have a massive dustbath – after all they haven’t had a chance for more than three weeks as they have been busy incubating a family. 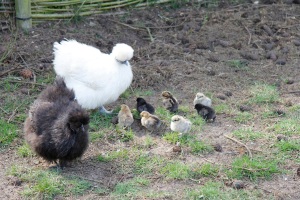 They then took the chicks out for a walk before teaching them to catch worms and introducing them to the rest of the Silkie flock.

This is how you catch worms

Meeting the rest of the flock

But those among you closely following the chick saga may well ask what became of the other six eggs?  Well that is a story for another post ……