I should start this post with a full declaration that it is quite obvious that I know nothing about turkeys and turkey breeding – although to be fair, I do know a little more than I did two weeks ago! The turkey chicks have been living happily in their brooder for just over a week now. Sometimes they sunbathe and sometimes they sit under the heat lamp. I have been feeding them chick crumb (hen as we don’t have anything specifically for turkeys) and some scrambled eggs.

Under the heat lamp

They have however grown up very quickly and have now started to get wing feathers and have  tripled in size – maybe more. 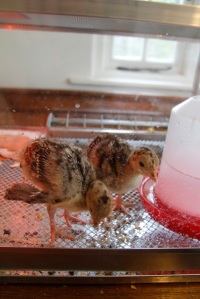 Chicks at one week or so

Is that three chicks I see?

So that is the first Happy taken care of. We now come to the sad. Everything here is a learning curve, sometimes I don’t learn quite as quickly as I would like. Or rather I learn some things, but not others. You will remember that two turkey hens were sitting on eggs. The first successfully hatched 6 chicks, but 4 mysteriously disappeared and the other two came to live in the brooder for safe keeping. James frequently said that he didn’t think the other hen was constant with her sitting – I should note that James is not very keen on having turkeys – he wants to eat the ones we have and be done with them. I also wasn’t completely sure of when she started sitting as I was away – and I didn’t keep accurate records. And it was these two factors that led to the Sad. I decided on Sunday that I would remove the eggs from the other hen. This would break the broody cycle and maybe she would mate with the stag and lay another clutch of eggs that she could hatch successfully. However, I wanted to see if any of them had been fertile. Yes, I know, I should probably have remembered the whole chicken hoo incident. In my defence at least I didn’t invite all the kids to watch. I collected the eggs and brought them to the back of the house by reception. My neighbour Pat was round. I gently tapped the first egg and it exploded with green goo – completely rotten – it stank. Sorry Pat that it went on you! This was not good as now the reception smelt of rotten egg.

Then I cracked the next egg open. This was even worse. There was a nearly fully developed chick that was alive. James was wrong, the hen had been sitting fine – they do get off the eggs to eat, drink and poo, especially in the early stages. I was wrong with regard to the date she started sitting. I cannot really express how awful I felt. Even though ultimately we would have killed this turkey and eaten it, to kill it by accident after so much effort by the hen was such a careless waste by me. I guessed it was about two days from hatching – the yolk hadn’t been reabsorbed into its body, but other than that it was perfect. Because it wasn’t ready to hatch though it did die.

Chick in egg that I killed – by accident

Obviously I quickly put the other 5 eggs back under the sitting turkey hen, but I didn’t hold out much hope. On Tuesday morning just 4 minutes before I had to leap in my car to drive to the station to catch the first of many trains to take me to work in London I thought I would check on the turkey and status of the eggs. And here comes the next Happy – there was a live chick sitting there. I was amazed, scooped it up and popped it in the incubator – so now we have three. 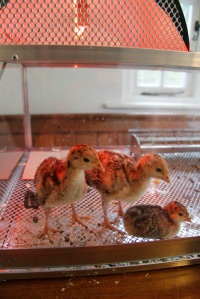 On the Wednesday, while on my way home, James emailed to say he had heard peeping and was sure he had seen one, if not two more chicks. Again I was beside myself with excitement and anticipation (possibly I should get out more!). As soon as I got home, I rushed over to the turkey area and had a look. There were no chicks, but there was one midway through pecking its way out of the shell. We beat a hasty retreat and left the turkey to sit on the eggs. Just before dark we, and a gang of kids went to check again, but the chick was still not out so again we left it. Helping chicks out is not a good move apparently. In the morning, I was hopeful that there would be another chick, but unfortunately it was the next Sad as the chick had died while trying to get out of the shell and the turkey had pushed it from the nest. Even if we had helped it, it wouldn’t have survived as it hadn’t completely absorbed the rest of the yolk into its body as you can see from the photo. 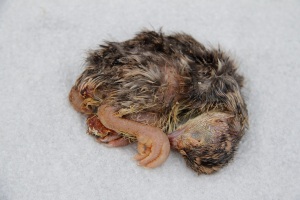 Dead chick – you can still see the left-over yolk

This was very sad, and as the kids had been hoping for a live chick we did what any sane person would do in this situation – we had a turkey chick funeral.

So now we come to very early Saturday morning. On a whim, having let out and fed the rest of the poultry, and worked my dogs I thought I would check on the status of the turkey and her eggs. Displaying a degree of erudition and prescience that is astounding I picked her up and told her that she couldn’t be broody any more, that there would be no more chicks and she should just move on with her life – only to find sitting beneath her a tiny, perfect chick. I scooped it up, much to her displeasure and popped it in the brooder, after I took this super-cute picture of it. Another Happy! 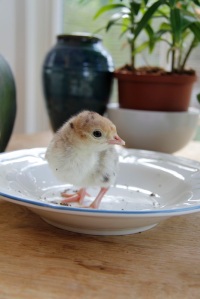 Returning from London Saturday evening we went to check on the eggs again – all I can say is that the turkey really doesn’t like me – and I have the peck marks to prove it. There was another chick halfway out of its shell, but unfortunately it too had died. We looked at it and it seemed perfect, apart from not being alive. I don’t know why it didn’t make it – I really hope it didn’t get squashed by the turkey when I took the chick out in the morning.

Dead chick out of the shell

Four turkey chicks in the brooder

So I have learnt a number of lessons: don’t trust James’ assessment of how a turkey is sitting – he is NOT a poultry expert – to be fair it is quite obvious that I am not either;  keep a record of when they start to sit; turkey chicks can hatch over a period of 5 days; always leave the eggs for at least a week or two after the ‘due date’ before you crack them open – actually remove them from the turkey and put them in the incubator – just in case; if you are going to crack eggs open don’t do it with an audience in front of your campsite reception!