James built a new shed with the help of some friends – thank you. It is a lovely new shed, spacious well constructed. He is keeping the fire-pits that we hire out in there.

Onions cruelly relegated to the garage, but currently drying in the sun

There is lots of spare room, but apparently my onions, shallots and garlic that are drying in racks are not allowed in as they are dirty! They have been relegated to the garage with the mower and the new chick nursery! He has said he will build me a nice new shed for my bee stuff though. Now I am in my forties I realise there is no such thing as enough sheds – you can always use another shed!

James was also on holiday last week which means things are going to get demolished. A few years ago when I had my second mastectomy his work kindly gave him a few weeks paid leave (I know – how lovely of them) to look after me. Once I was home he started to demolish the bedroom wall – while I was lying in bed. The plan was to make an ensuite – which we did. He rather impatiently waited for me to recover so I could do the tiling – no mean feat as we tiled using very large travertine tiles. We have proper demarcation for tiling jobs. James works out the pattern and if the tiles are stone, which tile is going where. e also cuts the tiles. I do the tiling and the grouting and then James cleans up – as he does that better than me – I am better at making a mess.

Anyway, I digress. James was off work so demolition was going to happen. Now he has a new shed, he no longer wanted the old summer house where we used to keep the firepits so he tore it down. It looks very different now. For about 40 years there has been a building on that plot: first a lovely wooden greenhouse in which my granddad grew tomatoes and where I would hide and eat so many I thought I would burst. After the greenhouse was destroyed in a storm they built a summer house – a shed with a veranda so they could sit outside with a little drink in the evening. Now there is nothing, but James does have plans …. to be honest I am too scared to ask about them, maybe in a few months when it is less busy on the site! 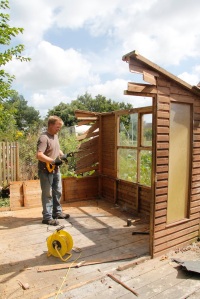 James is very photogenic unlike me!