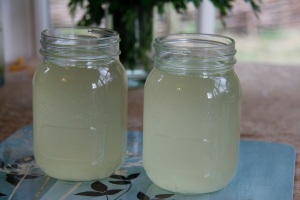 Last week I decided to use up the rest of the back and leaf fat I had for the black pudding. I thought I would render some lard.  This is very easy. First I minced the lard in my fabulous new mincer – have I said how much I love my mincer? – it did it perfectly. I minced the lard cold or really semi-frozen. 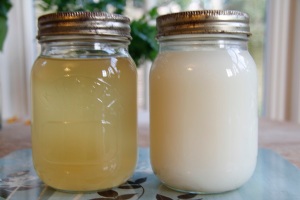 Half set, half setting

I then put the fat in a couple of roasting trays with a little water and popped it in a reasonably warm (170C – ish) oven. I did turn the heat down after a bit. gradually the fat melts and you can pour some off. I poured it through a sieve.

I think next time I might use an old tea-towel. I kept adding fat into the pans until I had used it all up. You will get left with some crispy bits of ??  pig, I guess. These are quite tasty, but I fed them to my dogs as crispy treats. I poured the molten lard into mason jars and let it set. Currently it is stored in the garage – not sure if it needs to be in a fridge. It made a lot of lard. I used some of it in a lamb stew – more on that tomorrow…..