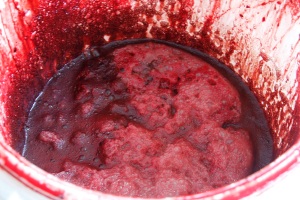 I am on a mission to find the best recipe for black pudding or boudin noir as it is known in France. My last batch was a Fergus Henderson recipe using polenta as a binder and it was delicious. This time I decided to use a recipe from Jennifer McLagan Odd Bits: How to cook the rest of the animal (219). It doesn’t use a binder – essentially it is blood, onion, spices and fat – what is not to like? 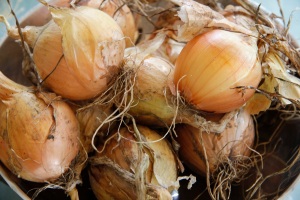 I tend to make a big batch  of black pudding the day we take the pigs to the abattoir – fresh blood, even with lots of vinegar added only lasts so long before it coagulates. As I have found out it does freeze well too which is a good job as I think I got about 16-18 pints of blood from the pigs! The cooked black pudding also freezes very well. I made 3 times the recipe below and used a little less salt. 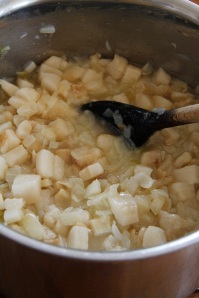 Put 300g of the fat in a large pan and cook over a low heat until some of the fat begins to render. Add the onions and stir to coat in the fat. Cook gently, stirring on and off for 45 minutes until most of the fat has melted. Add the rest of the fat and cook for another 20 minutes. Line bread tins and/or a square baking dish with clingfilm and divide the fat and onion mixtures between these pans. Whisk the blood, cream and spices together and pour over the fat mixture. Place tins in a roasting tray (or two) and pour water around the tins to come up to about half-way. Cook in a warm oven (160C) for 75 minutes or until a skewer inserted into the centre comes out clean. Allow the pudding to cool in the tins. When cool remove the cling film. Slice and either freeze the slices or fry immediately and serve with fried tomatoes, poached eggs or any number of other delicacies. This pudding is creamy and luxurious – absolutely wonderful. 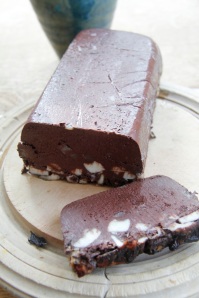 One response to “Boudin Noir”