We are not big hill walkers. To be honest James is not a big walker full stop – he can’t see the point. He is of the view that if you need to get somewhere, drive. He can slightly see the point about walking dogs, but reckons a frisbee on the beach gives them enough exercise – he probably has a point. I however, love walking. James, because he is sweet, comes walking with me sometimes. We occasionally walk where we live and stop at a pub for lunch. We did quite a few shortish walks or an hour or two on Islay, mainly along beaches or the coast. I didn’t have a book with any walks in, I couldn’t see any signs for walking, couldn’t find any footpaths on the OS maps I had, and the woman in the tourist information office reacted with horror when we suggested we wanted to walk with out dogs. Mainly I didn’t realise that you have the right to walk anyway in Scotland and this is why they there aren’t footpaths indicated on maps. So long as you are respectful and don’t interfere with livestock you can roam freely.

Anyway, on Friday I wanted to try a more adventurous walk. I wanted to walk from our cottage to the two Glenastle Lochs we can see and then on to the coast. There is a small stream or burn running from the second loch down to the coast where it ends in a waterfall and I wanted to see that.

So off we set. It was a misty, grey day, but not bad for walking. We walked along a track to the first loch and there found a rowing boat that we were allowed to use. Much to the disappointment of the dogs I wanted to have a go on the boat so we pottered around on the loch for about 20 minutes or so. Kainaat (the fleet and fearless) was not convinced that it was safe to be in a boat – apparently rowing boats aren’t in the remit of a sheepdog. He stayed cuddled up to me the whole time – big wus. Daisy wasn’t hugely happy either.

Once we got back to dry land Kainaat made it quite clear with his ‘serious face’ that he was not getting back on the boat.

Kainaat is determined not to go back on the boat

We then explored an old derelict dwelling – the small house was still standing, but the various walls and outbuildings were crumbling. We saw lots of very old, abandoned dwellings on the walk from a time maybe when there were more people living on the Oa. 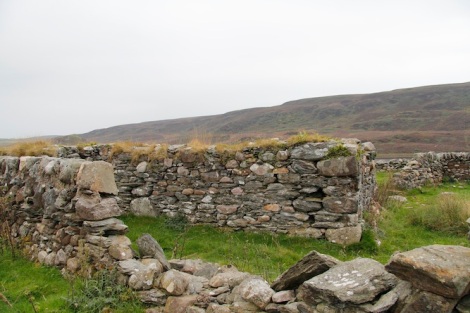 The dogs were having a great time as there were no sheep or livestock around they could run around freely. It was wet around the first loch so we walked up the hill and then descended down between the two lochs. We were mainly walking through heather with lots of boggy bits (technical hill-walking term)

When we got between the two lochs Kainaat was rummaging around in the heather and bracken and managed to put up a red stag – I called him back and he came  (lovely boy), but this made me cautious to keep them close to me.  We then walked around the side of the second loch. I think we were following a sheep path – it was quite boggy. 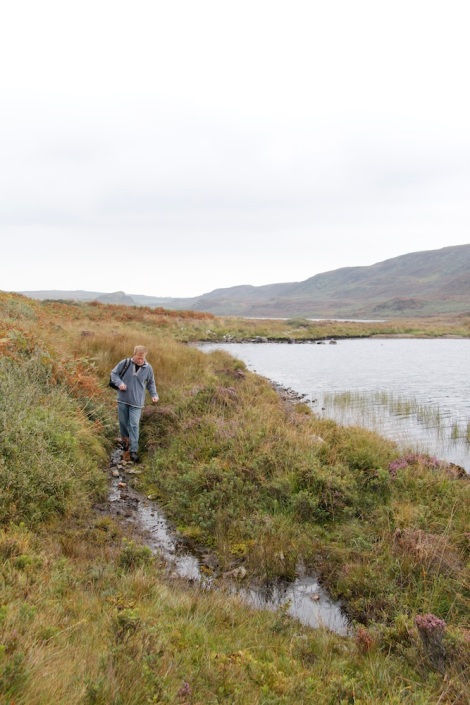 We continued beyond the lochs. There were quite a few sheep dotted around. At first I kept the dogs on the lead, but then thought I would let them walk free. Daisy Dog (following our words the previous day) was good as gold. She knows the drill when walking and just followed in single file. I was surprised, but Kainaat was also very good. He needed reminding to stay in line and not bounce off, but he did not run off, nor did he bother the sheep. I now feel confident in walking through livestock with both dogs.

Finally we made it to the coast, but we were at the top of a cliff. I really wanted to go down to the stream and then beach so we cautiously scrambled down wild goat paths, much to the amusement of the goats and got to the stream where we had our picnic. 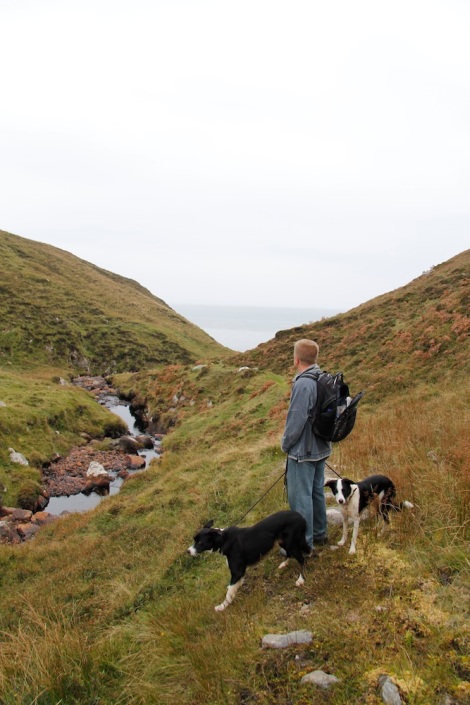 Dogs were on leads when we were on steep edges although they are far more sure-footed and sensible than me so next time I will probably let them off.

The we set off on the way back. This time we walked around the other side of the lochs and kept to the top of the hill. We trudged on through the heather, squishing through boggy bits while sheep stared at us in amazement. Daisy Dog kept encouraging us, except when she got bored and lay down.

James looking as if he was having a good time – I didn’t include the photo where he looked less happy!

Finally we made it back. Maybe it was somewhere between 5-7 miles (I don’t know) over quite rough ground, but it was an adventure and it was really fabulous to be just by ourselves in the middle of so much beauty. We collapsed into the hot tub and sauna and staggered to bed.

11 responses to “Hill Walking on Islay”