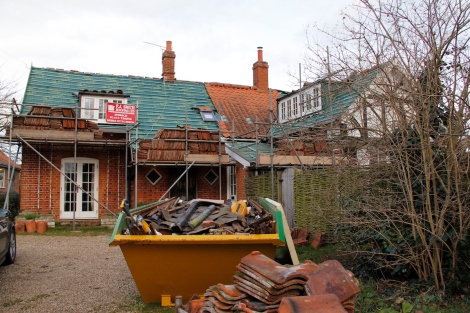 We’re having a new roof put on our house. The old one leaked. We have known since we moved here that we needed a new roof, but we kept putting it off – new roofs are expensive. We got the dormer windows fixed so we didn’t need to have buckets in the bedrooms and we kept our fingers crossed. However big damp patches keep appearing everywhere. The final straw came when every time it rained the damp patches on our bedroom ceiling got bigger and bigger. It was only a matter of time before it fell down. So we did what we had to and remortgaged our house – we don’t have the kind of spare money you need for roofs lying around – we spend it all on alpacas, chickens and slicing machines. 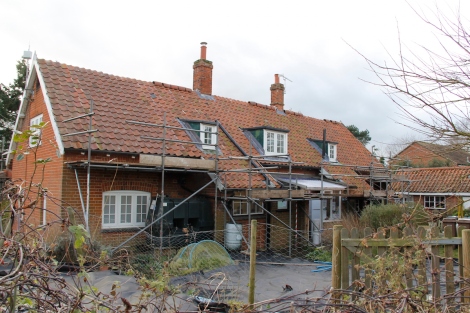 The house hasn’t had a new roof for a long time – until this Thursday I didn’t know how long, but now I think I do. The two roofers uncovered an inscription on the chimney beneath the rafters. 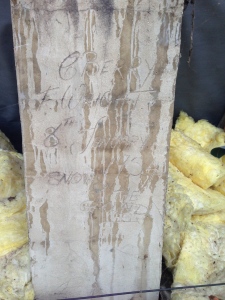 I didn’t know who these people where, but then my neighbour Ivan came round and told me that Cecil Berry and Mr Wright used to work for the builders G.W. Smith who did the septic system and cess pits at the house many years ago and who are still a local builders today. More amazingly Ivan used to work with Cecil. He also told me that builders often leave a signature or leave a coin under the threshold – I like this idea a lot. I am thinking of maybe putting together a little time capsule to be hidden back among the rafters before the roofers finish here.

Our house was, between 1880 (I think) and the early 1930s,  the old church school – hence its name: St. Margaret’s House. It was a single story building, but at some point in the mid 20th century it was converted into a two story house – you can see where the old large window used to be before it was bricked up when the first floor was added. I guess it was probably converted in the 1950s when the roof was last done and the new chimney was added. 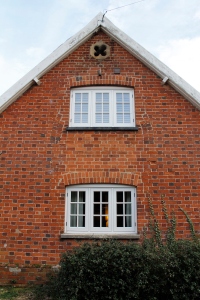 An end bit has been added into our house as well – the far right-hand side as you look at the front, and also the two rooms that stick out at right angles in the front.

I am not at all interested in the history of houses – to be honest I am a very reluctant historian, but I am curious about how our house got to be the way it is. There is nobody in my family left to ask about it now, but Pat is organising a village history project and has found out lots of information about the old school so I will ask her for more details and maybe I will be able to post some photos of how it used to look here.

4 responses to “Houses and History”