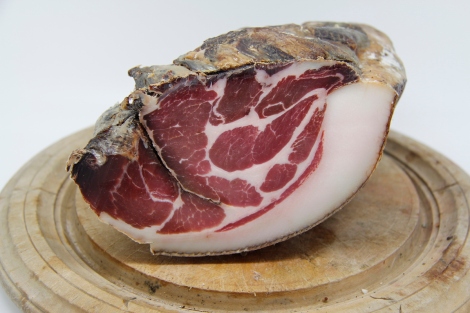 Our spalla is ready. I am so excited by it I keep squeaking!

Spalla: (recipe from the River Cottage book of Curing and Smoking by Stephen Lamb). Cure ingredients – 120g sea salt, 1/2 tsp of dry mustard and grated nutmeg, 50g each of ground juniper berries, allspice and black pepper, 86g dark brown sugar, 10 shredded bay leaves. This amount of cure is for 4 kg of boneless pork shoulder. The percentage of salt to meat is 3% – if you have a smaller shoulder you need to adjust the cure.

I used our free-range Large Black pigs for the meat. Mix the cure together. Put half in a plastic bag, add meat, rub rest over the meat and seal bag. Leave in a cool place for 3 days per kg of meat. After the allotted time, wash off cure, pat dry and leave to dry out in fridge for a day or two. Roll and tie the meat – I am rubbish at this bit – and hang for 6-12 months in a game safe or something to keep flies away –  until it has lost 30% of original weight. I left ours for about 4 months – it lost 30% in this time. 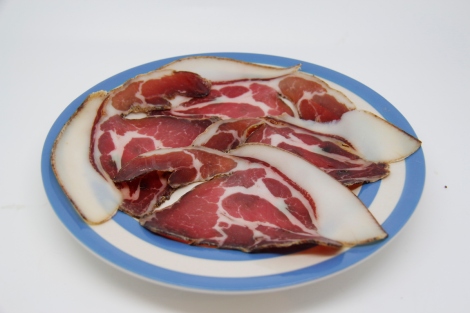 The spalla was covered in all kinds of odd mold including the slimely green variety. As a supreme act of self-sacrifice I ate some of the spalla as a test and when I wasn’t violently ill I knew it was safe! I wiped off some of the mold with a rag dipped in vinegar. You can see the mold here 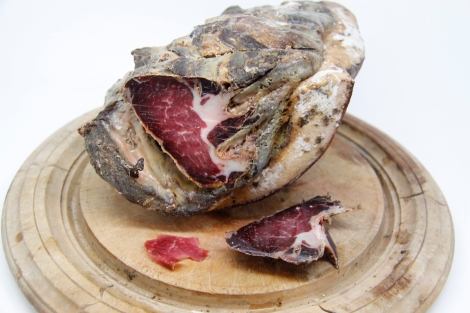 Initially I sliced the spalla as is – this worked quite well, but then I decided it would be nice to cut off the rind (thus getting rid of some of the weirder mold) so I did this on each individual slice which was a little time consuming. So I cut the rind off the rest of the unsliced meat  and then sliced it – this made it not quite as easy to slice – a dilemma I still haven’t resolved. I sliced it ever so thin, so thin you can fold it up and eat slice after slice without really noticing.

The main point is, it is delicious. We have eaten it just as is, on freshly baked bread with butter and home-made pickles, in sandwiches with cheese, and in omlettes. I will be making lots more of this.

N.B. of course the fat is the best bit.