Yesterday was a beautiful, sunny day so we spent it all outside doing stuff. It started well with a bit of a lie in and breakfast in bed – no cake as I hadn’t gotten round to making one. And then we jumped straight into another non-stop weekend day.

We spent much of the day working on Strawberry World (take 2). For some reason James and I think it would be exceedingly funny to grow hundreds, if not thousands of kilos of strawberries – well this is what we are hoping for. But we don’t have time for weeding. So after not much thought and a bit of a look on the internet we have come up with an ingenious system of gutters and strawberries – more on this later. Suffice it to say James spent a large part of the day building frames and attaching gutters and I spent it filling them with soil and small strawberry runners I had saved from when we dug up this part of the garden.

After lunch I spent some time training my dog – we did nose work (search squares and tracking), sendaways with redirects, heelwork and retrieves – he loved it, I loved it, we had a great time together.

Then I the checked the bees to make sure they had sufficient fondant – they were all OK, but I gave a couple of the hives a little extra.

After this I worked some more on strawberry world and cleared some more of the fruit cage so we can eventually move some of the currant bushes and fig trees here.

About 3.30 or so we went and moved the Naked Necks. I want them to free-range but I want to ensure Red Rooster (Naked Neck cockerel) is the daddy of the eggs his hens lay. Without getting too colourful Yong Zheng, although a quarter of the size of Red Rooster, chases him off if he sees him getting friendly with any of the ladies! Because of this I had kept the naked necks in the Eglu Cube (with a run) but it isn’t the same as proper free ranging. Anyway, we moved them into the PV array field  where they will be hopefully far enough away from the main flock. Hopefully they weren’t too traumatised by the bumpy trip – they travelled in the coop as we pushed it. 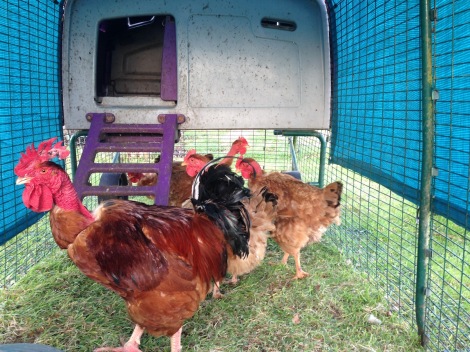 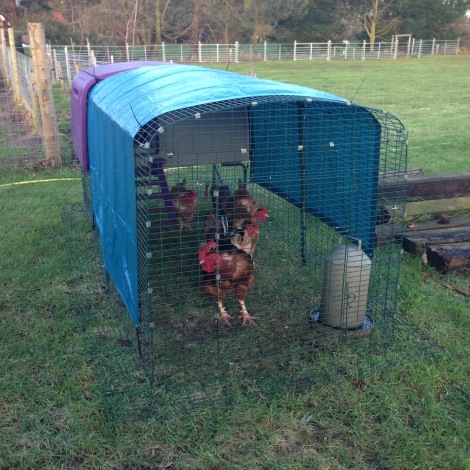 About 4-ish we started to sort the lambs. We took three to the abattoir this morning and needed to get them separated from the others. But first we had to confirm we had the wethers and that they were ready to go. Once corralled I had to tip them up and check their bits – really I can’t believe I spend my Sundays looking for sheep penises! I did a few and then James did the tipping as it probably wasn’t a good idea to do this immediately after a couple of biopsies! 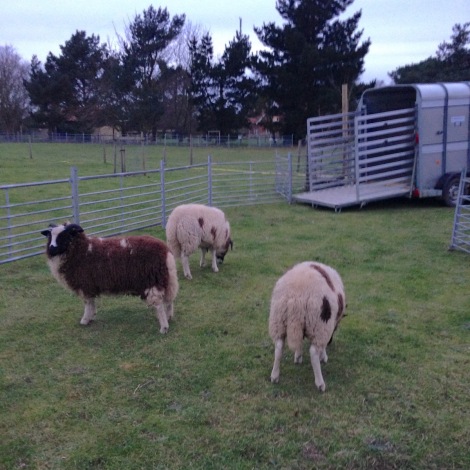 Once separated we put the trailer in with them. Their siblings were in the field next to them so they weren’t worried. Sorry about the blurry photos, it was nearly dark by the time we did this. They were quite curious about the trailer. 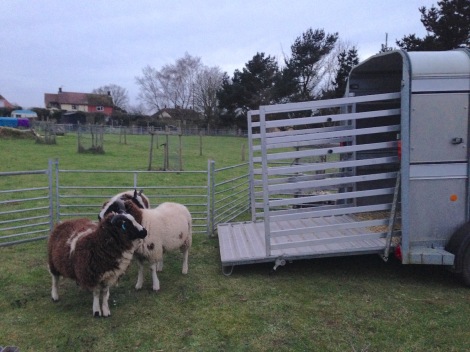 At dusk I fed and watered all the animals while James tidied up the tools.

Then when it was dark we killed a neighbour’s chicken who was poorly. Once you get known for being chicken killers everyone wants you to ‘do’ their chicken. We don’t mind. When we first had chickens, before we knew how to kill them quietly and without stress we were so grateful that Billy and Brenda killed one of our poorly ones.

Then at the end of the day I made a rather nice fish and swiss chard curry – recipe tomorrow on the eating from the smallholding round-up.

A day well-lived I would say and not a drop of it wasted.

N.B.  I was so exhausted I forgot to have any ice-cream though

N.B. we successfully got the wethers in to the trailer at 6am this morning with no stress and off they went to ‘university’!!

One response to “Yesterday”