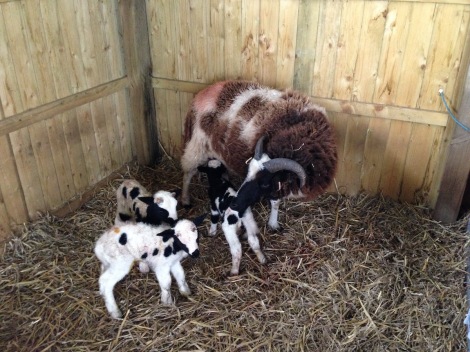 Wanna know how to get a ewe to adopt another ewe’s lamb? Go on you know you do ……

At 6am this morning I got up to check on the lambs and found that one ewe had just had triplet ram lambs. And another ewe (a first time mum) had had a single ewe lamb.

I got them all in pens (with much hurdle moving and cursing on my part) so I could check them over – all seemed well.

The mum of the triplets was caring for them all and gobbling up her afterbirth – yum yum – this is good as she will need her energy as triplets can be a huge drain on the mum. 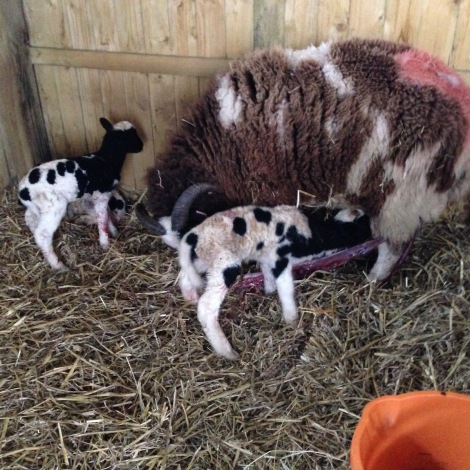 Then Andrew, my friend who is a shepherd texted and suggested I try getting the new first-time mum (let’s call her 30 as we didn’t give the sheep names before) with just a single ewe lamb to adopt one of the ram lambs – oh yeah – this is where things get interesting.

I got ready – gloves, lube, penknife, and an eye on the fittest, largest ram lamb from triplets in the next pen.

Aretha and 30 before I duped her into thinking she had had another lamb.

The afterbirth was finally coming out of 30, but I needed to confirm that there wasn’t another lamb inside. I went in – she wasn’t happy (really I don’t blame her). James tried to hold her against the wall of the shed. I had a good feel around and kept telling myself that apparently you can’t put your arm too far inside a sheep – but another little voice – the bad little voice – kept telling me that I have very, very long arms.

Then I carefully removed my arm – making it seem as much like a baby lamb as possible, grabbed the largest ram lamb from the next pen,  cut some of the afterbirth open on to the ram lamb, smeared it over him and presented 30 with the new lamb she had just given birth to. The lamb was a bit unsure as he was pretty confident he had a mum, but she gradually took to him and now has adopted him as her own.

The sheep who had triplets (35) was also pretty unhappy that one of her lambs had been taken, but she will so thank me later.

I moved the little adopted family to the opposite pen so original mum and adopted lamb can’t see each other and everyone is settling down fine.

Other than that I gave some multi-lamb rapid to 35 (having three large triplets has got to take it out of you), stomach-tubed both her remaining lambs with colostrum as they were looking hunched and hollow and gave 30 a shot of antibiotics as I had been rooting about inside.

The triplets are called Bowie (adopted one), Ziggy and Aladdin. The little ewe lamb is Aretha.

Oh, and by the way, if anyone ever has a root around inside me, presents me with a baby and tells me it is mine, I will not be as understanding about it! 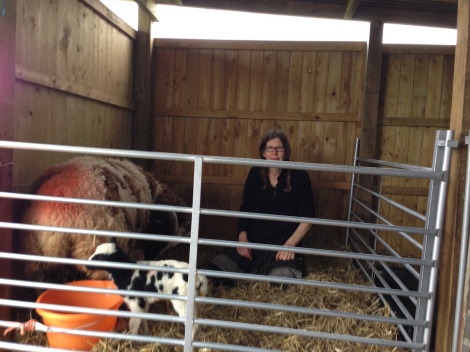 Me (post-adoption) looking crazy tired as it has been an exhausting weekend, but I have learnt a huge amount – so that’s OK then!

I am lucky enough to live near to a generally deserted beach so I have kept up my swimming early in the mornings. . . #wildswimming #swiminyourpants #winterswimming #coldwatertherapy #seaswimming