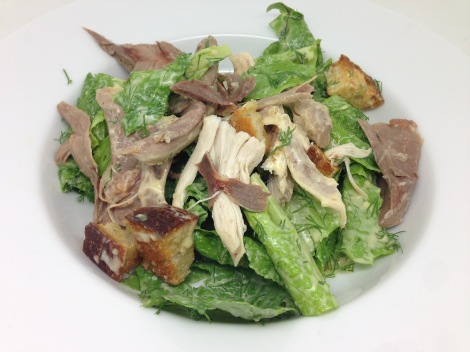 For round two of the poached chicken I made a caesar salad with some romaine-style lettuce from the garden.

For the caesar dressing I make a version based on one by Delia Smith. I use a tiny bantam egg as that makes enough for two people, but I guess you could use a hen egg and just have some leftover. I pop a clove of garlic, the egg, tsp of mustard powder, one or two anchovy fillets, some grated parmesan and a good shake of Worcester sauce in the small bowl of the food processor.  Whizz it up and then gradually add in some oil – a few drops then a tiny trickle. Keep going until it has emulsified and is the consistency of single cream or so. I used sunflower oil – sometimes I find olive oil can be a little too overpowering. I need to get some rapeseed oil though.

I made croutons with some leftover sourdough and I added some dill as we have a lot of that currently. I then sprinkled more parmesan on top – I usually use shavings for the salad, but was feeling too lazy and had already grated some.

With the light stock from poaching the chicken I made two soups. The first was a batch of Turkish lentil soup. I fried an onion and a little packet of soup mix I made last autumn from chopped up carrots and celery that I keep in the freezer, in some olive oil. I added the stock and lots of red lentils and then let it simmer until the lentils were done. I added some salt to taste and lots of lemon juice. It looks insipid, but it tastes great. 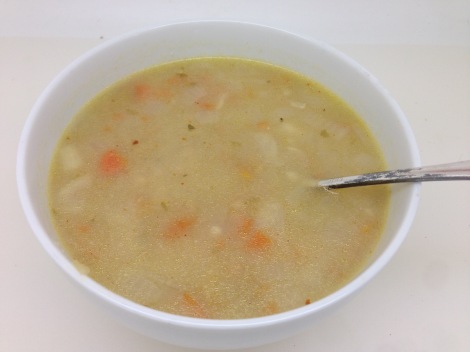 The last of the chicken went into some enchilada-type things on Friday when James’ uncle Joe was here. I refried some black beans with a little butter, cumin, chilli and cinnamon, spread them on a tortilla, added chicken and rolled them up. Covered with tomatillo salsa from the freezer and grated cheese. No photos as I was so excited that Joe was here.

Carrot, Squash and Harissa soup – The second soup was made using the last of the squash from last year – it kept OK until June – how cool is that? We were given a load of free carrots from cold storage for the animals so I snaffled some for us as I am cheap. Whizzed up carrots and squash in the processor – sauted in a little oil, poured over the stock and gently simmered. Liquidised it all and added a couple of spoonfuls of harissa and some salt. I should have taken photos but I didn’t as I am in the middle of a big bake-athon for the symposium next week. We can’t do theory without home-made cakes as you can see here and here!

Squash planted where the greenhouse used to be under the old Apple tree - rest of the squash in the #hugelkultur 😊 . . #growfood #vegetablegarden #marketgarden #allotmentfood #bluerabbitsmallholding