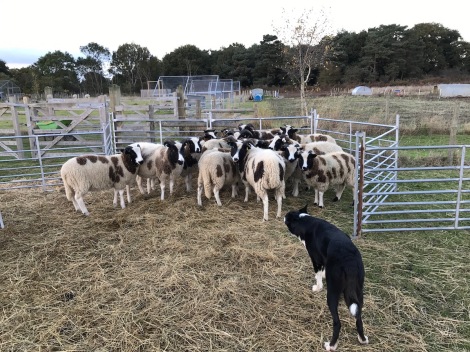 In the summer Kainaat was in with the ewes when their lambs were quite little. One of them headbutted him. This happened again a day or so later.

He lost his confidence.

This was not good. 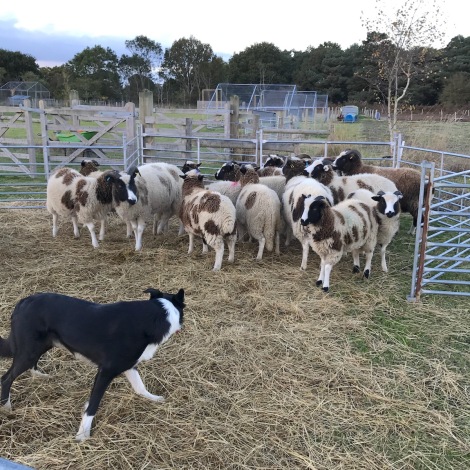 I have spent the past 3 months working with him to get his confidence back up. This included me and him staring at the sheep and trying to make them move – the sheep (thankfully) generally don’t headbutt me!

Then I would encourage him to run close between the sheep and the fence. He still couldn’t move them, but slowly he was getting less frightened.

And then about 3 weeks ago, he went in and gripped a particularly recalcitrant sheep. Gripping is the shepherding word for having a little nip. Gripping is frowned upon in competitions but it is essentially if you have stubborn, mardi sheep.

He gripped another one or two over the next week – just a little nip on their hind legs, but enough to convince them that he is more closely related to a wolf than they are.

The dynamic changed and he can now move the sheep. He can gather then, bring them to me, drive them forward and pen them. he has slowed down from last year and is finally learning to give the sheep the right amount of distance.

Here is a little video of us working.

I have been working with him moving the sheep around an obstacle course. I will try and get James to take a video of that as well.

N.B. Getting headbutted by a sheep is a pretty serious thing and can kill a dog so I don’t blame him for being scared.

4 responses to “Fight the Fear”

After horse riding we went to #clevedonmarinelake where, by chance, I met three other lovely #wildswimmers. They were just about to swim so I joined them which was lovely as I was faintly terrified about the eels in the pool that they assured me just hung about the bottom and wouldn’t come and get me - #realseamonsters - it was such a beautiful place to swim . . #swiminyourpants #seaswimming #winterswimming #thestoics #swimallyear #tidalpool #wildswimming #coldwaterswimming #outdoorswimmingsociety