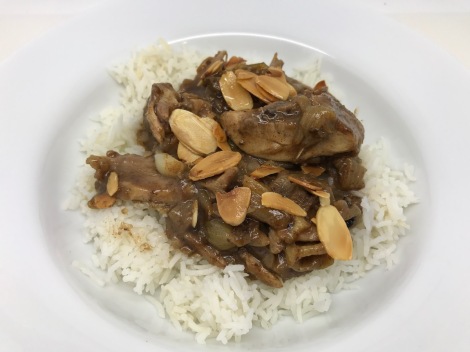 We have quite a few shallots and we also have honey and chicken so it was inevitable that I would make this from Claudia Roden Arabesque (96). It is a Moroccan dish and is very easy to make. I do wish I had added a couple of unpeeled pear quarters to the dish, but I wanted to keep it simple as I had been out all day dog training with the wonderful Kainaat (see here for my take on working trials!).

He did really well, I caught up with some good friends, ate lots of home-made cake and given I was sitting in a field all day, it only rained a little bit!

I was exhausted, but this is a very easy dish to make. I also learnt that you can peel shallots by blanching them in boiling water for 5 minutes.

To peel the shallots blanch the shallots or baby onions in boiling water for five minutes, then drain and allow to cool. When cool, peel.

Meanwhile peel and chop the large onion and soften in the sunflower oil in a large pan in which you can pretty much lay all the chicken pieces down in a single row. Add the saffron, ginger and cinnamon. Then add the chicken and allow each side to brown. Season with salt and pepper and then add 250ml water, cover the pan and coo over a gently heat. If cooking breasts, remove them after 15 minutes (when they should be done), with legs leave for another 20 minutes until tender. Once I had removed the legs I then added the shallots and honey and cooked it slowly for about 30 minutes and then turned up the heat to cook off all the remaining liquor. The final dish should not be too saucy and the onions should be very soft and caramalised. You can now replace the chicken pieces – I stripped all the meat off the legs first as James doesn’t like bones!

Just before serving, heat up a little oil in a frying pan and quickly fry the almond flakes – then scatter on top of the dish. This makes enough for 4 so we ate it on Saturday and Sunday.

N.B. The dog training group often feels more a cake club where people do a bit of dog training in between eating home-made cake 🙂

N.B. Kainaat has another trial at the end of the month so could do with a bit of practice as we often get distracted with sheep work instead.

N.B. We ate this after watching the our local pub’s fireworks from the front row seats, warmed by the fire, and drinking tea at pitch one on the campsite, thereby avoiding the crowds – thank you for letting us join you 🙂