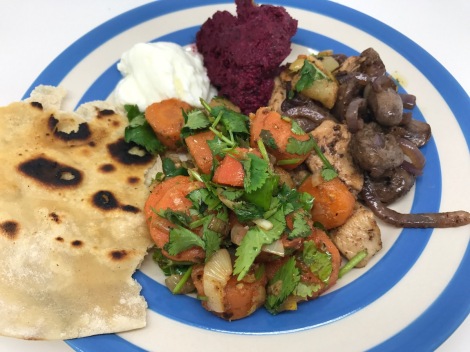 We had the spice carrot salad with beetroot hummus, home made flat bread and yoghurt and Jerusalem mixed grill.

The grill uses chicken hearts, liver and breast, but I left out the liver, not because I didn’t think it would be delicious, but I am saving my livers for chicken liver parfait. Plus I had already put the livers from Sunday’s chicken killing in the freezer. 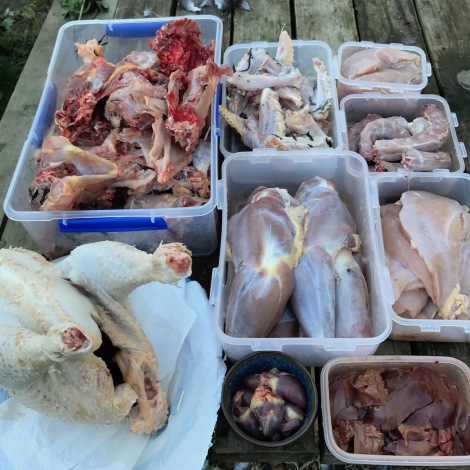 The recipe is adapted from Ottolenghi and Tamimi Jerusalem

I also made some baharat to use in the dish. This week has been a week of making spice mixes in my coffee/spice grinder, I also made garam masala yesterday for my daal – I wish  I had known how easy this was years ago, but then again, at times I can be a bit of a slow learner!

Put everything in the spice grinder and grind! 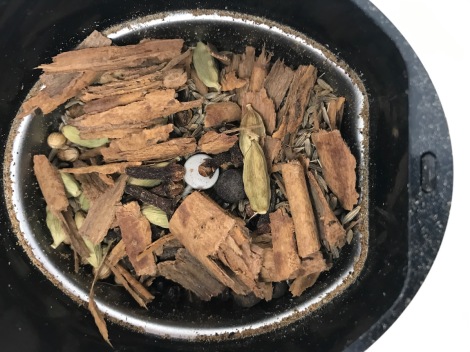 Slice the hearts in half and fry in a little oil in a frying pan. Remove to a plate. Fry the cubes of chicken breast in the same pan and then remove. Fry the sliced onion until tinged dark brown at the edges. Add the meat back to the pan with the spices and seasoning and cook through. Serve with flat bread and whatever salads that you want.

N.B. 7 chickens killed – one left whole for when friends visit, three butchered into breasts and legs, three made into dog food, necks and wings made into puppy food, hearts used in the grill, livers in the freezer for pate and parfait, feet for Kainaat.

N.B. Now I have introduced necks and wings into little Zephaniah’s diet the squirts have improved to My Whippy state which is good – yay for bones!