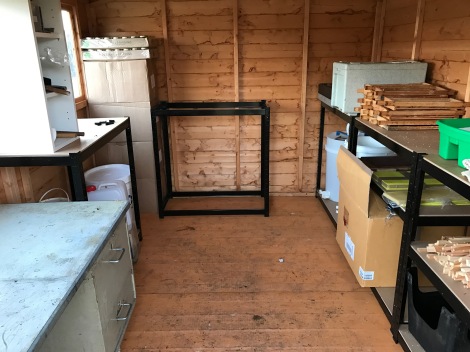 On Sunday, after my swim, we cleaned out my bee shed. Last autumn was a bit chaotic. After trying to extract the heather honey just before leaving to go on holiday it might have been that some of the frames got put out in the apiary so the bees could rob them. I know there are lots of problems with this – usually I would put the supers back on the hive above the crown board, but due to me leaving the garage door open, millions of bees had swarmed all over the frames and it was just all too mixed up! When I came home from holiday I may have compounded this error by putting the by now wet frames in the shed where they obviously went mouldy, attracted a swarm of wasps and got riddled with wax moth larvae.

We dragged everything out, and swept the floor. James built some new shelves and I cut the horrid mouldy comb from the frames. I am hoping to reuse the frames – not sure how to get new wax in as I might have been over-enthusiastic with the nails when constructing the frames ….. I probably need to watch some YouTube videos. 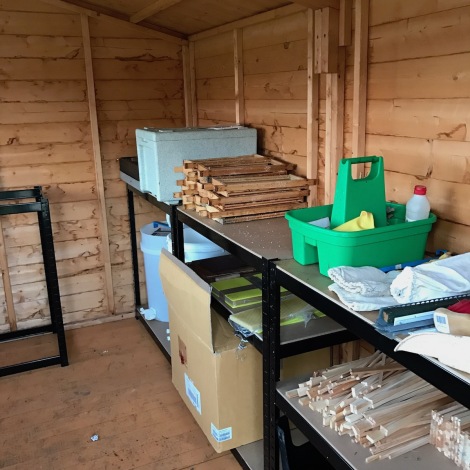 I then put everything back in in a neat and organised manner. Now I just have to find the time to make up my new supers and to get some new brood and super frames going and we are set for spring …. or as ready as a bad beekeeper ever gets.

I also finished sorting out the raspberry patch at the side of the house. About 6 years ago I  bought ten autumn raspberry canes that I planted over in the pear garden. They were moved over here a few years ago, by which time they had multiplied. Raspberries are prolific – they produce suckers which become new raspberry canes – you can pull these up and replant them elsewhere. Every year I work on extending the raspberry patch by pulling up suitable suckers. I now have 4 double wide rows. The plan is to eventually fill in the patch in the middle covered with black plastic. This year however, when the plastic has killed off all the weeds I will plant my sweetcorn here with squash plants acting as  mulch – a bit of a three sisters Meso-American garden thing again.

I cut the raspberry canes down to about 6 inches high, removed the weeds, liberally covered them with alpaca poo and then piled on old sheep hay as a mulch. I am toying with the idea of putting in some irrigation here for watering. often they don’t need it, but last year they suffered I think from lack of water.

N.B. I also radically cut back my climbing clematis, roses and honeysuckle on the old fence – I cut them back to just a few inches high. This is so we can remove the old broken fence and build a new one …. I really hope they grow back.

N.B. I can’t even begin to imagine a life in which building a fence is not near the top of the ‘to-do’ list.

N.B. I will be a much better beekeeper next autumn helped no end by the most exciting life change …. oh yes, in September I am going part-time at work … insert small dancing lady here hysterically squeaking with delight …. plan B here we come.