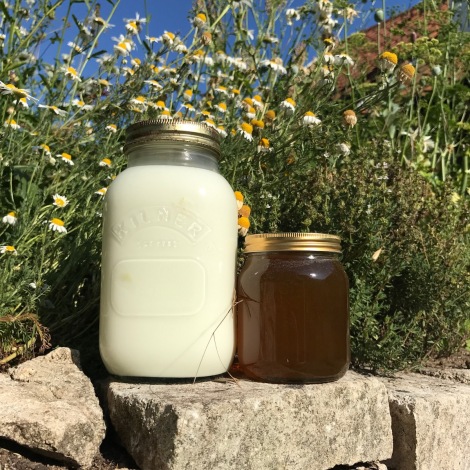 A litre of milk from Iggy Pop this morning and 41 lbs of honey from two supers from the fabulous aptly named Hive No.1 this afternoon. I reckon I could now die happy. 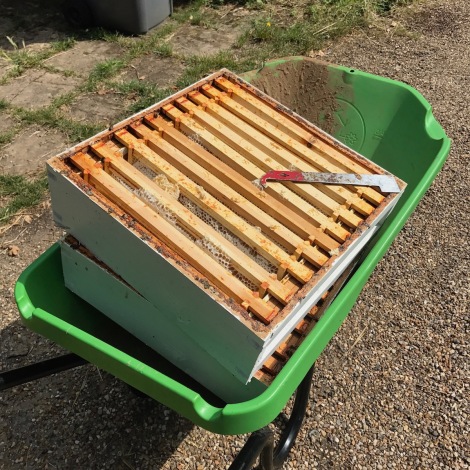 I made yoghurt with the milk and the honey is now on sale at the campsite – it is raw, unprocessed, single-estate, early summer honey – probably mainly from wild flowers, clover, gorse and blackberries.

The swarm I collected a few weeks ago are still hanging around. They weren’t impressed with the brood box and frames that I put out for them and chose instead to build their own comb from the crown board in the super box that was around the plum branch they had originally swarmed on. I then decided to flip the crown board and use it as base – still with the super around and then I putt the brood box on top with the roof over that. Bees like to build down, so I am not sure why I did this 0 we will see if it encourages them to go up into the brood frames – there is a laying queen from what I can see though.

I generally don’t post any photos from the hives. This is because I work alone, I wear thick gloves (I am a bit allergic to bee stings) so I can’t use my phone with them on, and taking photos just makes doing complicated things even more complicated.

Anyway, I momentarily tried to be a bit flash and record me filling a jar with lovely honey … it didn’t end well. This little clip ends just before I threw the phone on the floor and honey went everywhere -lesson learned.

N.B. I am also working on getting my first out apiary – a friend has agreed to host a hive in their garden ….. so now I have to drive some bees over there, oh that will be fun!

8 responses to “Land of Milk and Honey”