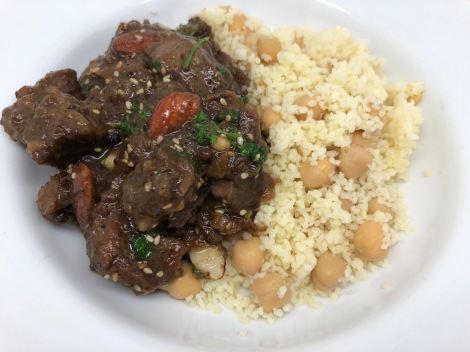 I wish I had taken more photos of this dish, but my day was spent clearing weeds from the polytunnel doors so I could actually shut them; dagging sheep (who had had the scours!); dog training, making masses of black pudding; working on the horror that was strawberry world (but more on that later); and slap marking pigs in the dark.

This sounds odd, but it is wonderful. It is loosely based on a recipe by Claudia Roden in Arabesque, but modified somewhat to take into account the fact I only had almonds with their skins on and had very dried dates as I once bought a vast box in case the zombie apocalypse was nigh. I also used hoggat and mutton not lamb as it taste better.

Heat the butter and a little oil in a large deep casserole pan and brown the lamb. Remove from the pan and gently cook the onions in the same pan. Add the saffron and ginger and meat back into the pan. Season and add in the cinnamon stick. Just cover with water or stock and bring to a simmer. Cover the pan and let simmer gently for 90 minutes or so. Then add in the dates chopped in half and cook for another 30 minutes.

Just before serving, fry the almonds and sesame seeds in a little more butter then add to the tajine.

We had it with couscous and chickpeas and a bit of leftover parsley sprinkled on top!

N.B. I washed my hands very thoroughly after dagging the sheep and before making the black pudding …. no really i did.

11 responses to “Lamb Tajine with Dates and Almonds”